skip to main | skip to sidebar

I have to post pictures here in order to use them on another site that doesn't store photo data.  I'm trying to explain how you can laminate studs together to support beams, but my descriptions were lacking.  They asked for sketch-ups---they get photos. 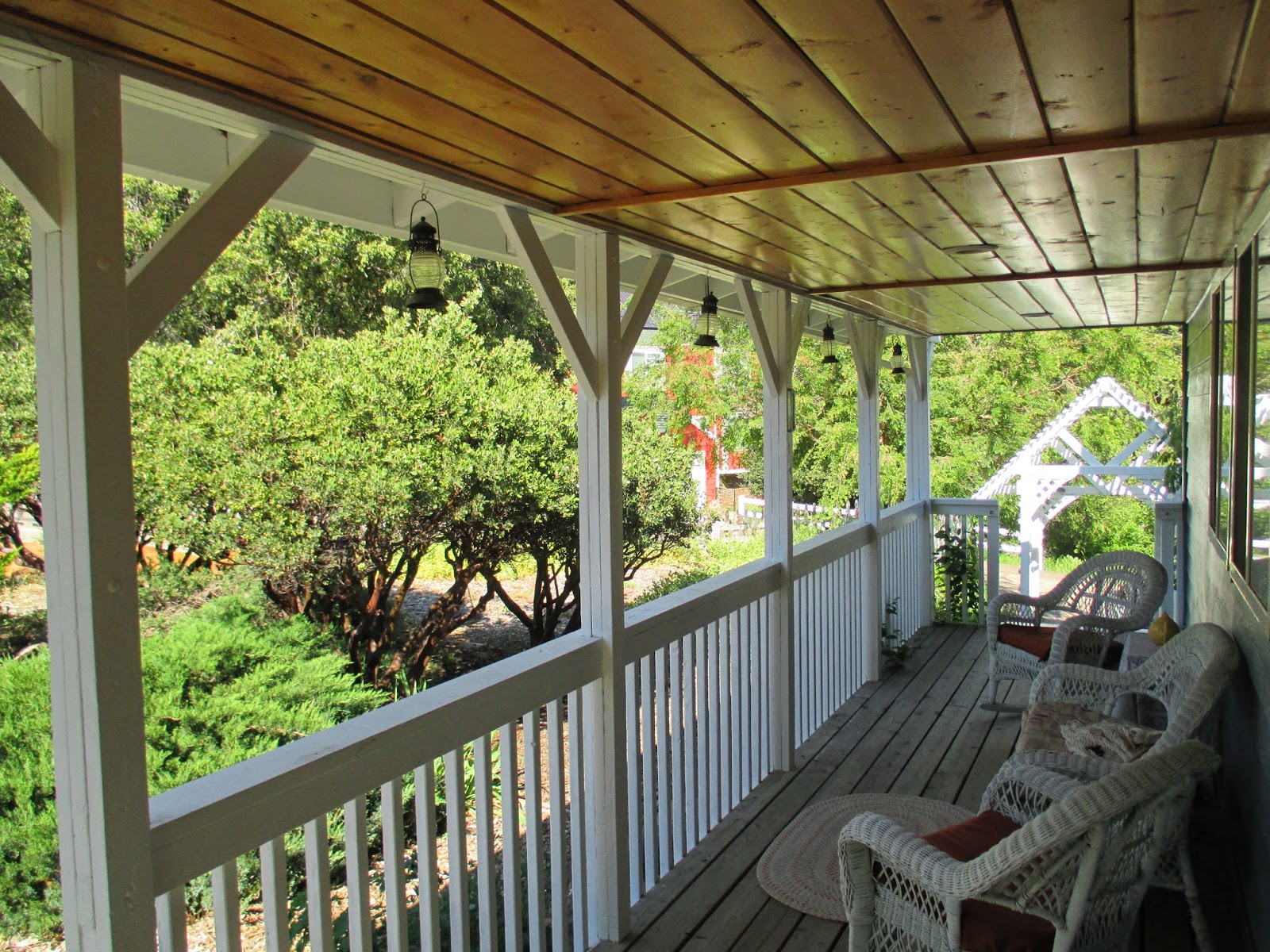 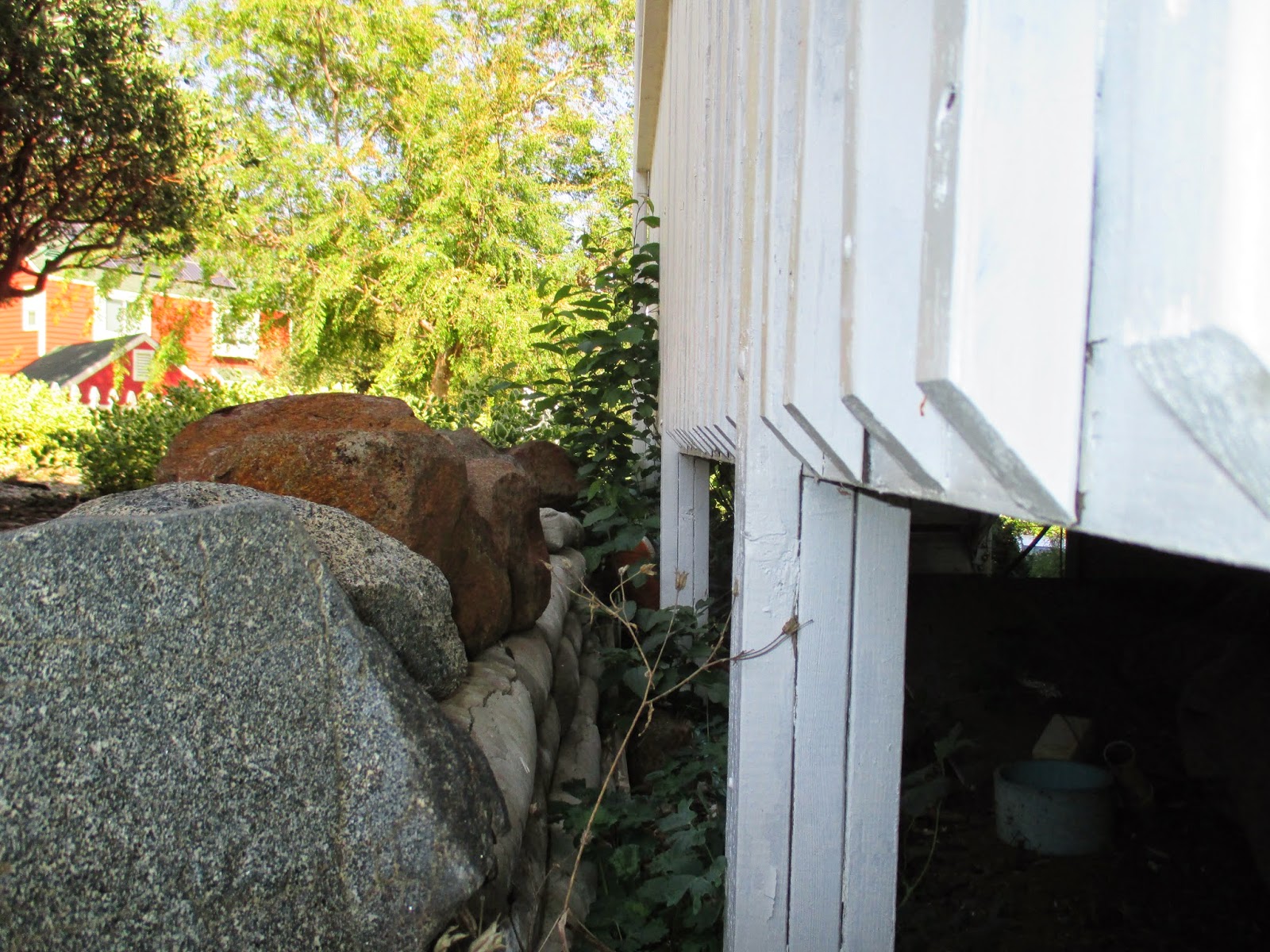 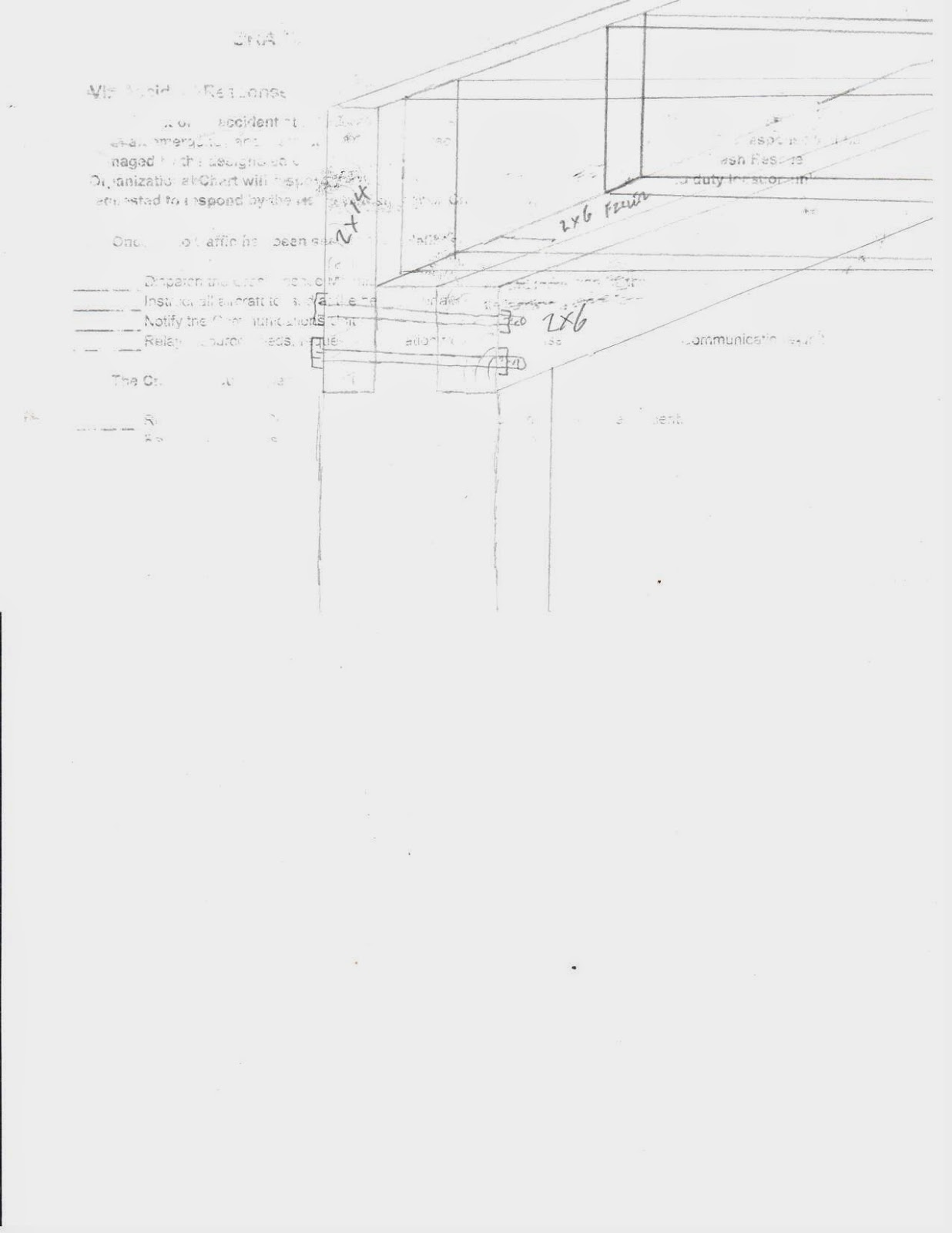 A friend of mine is studying psychology.  He was talking to me about an assignment where he was supposed to identify a modern manifestation of a classic mental disease process and provide a case history.
I recommended writing the parallels of chronic internet trolls and psychopathic behavior.  I had the perfect case to study, too---some guy who goes by 'Eddie1278'.  I was first introduced to Eddie on a design/owner builder forum I frequent http://countryplans.com/smf/index.php .  I was encouraging someone to take on their own electrical work, and made the point that it was one of the easiest stages of construction.  Eddie, who is some sort of electrician, took exception to this and after multiple, very kind (I thought) attempts to turn his expertise into something positive, got himself banned.
This student did an online search and informs me he's been banned from quite a few forums around the 'net.  He was able to identify a pattern----first throwing out some point of authority statement, then picking fights with whoever challenges, quickly calls them a troll, then gets banned.

There are personality traits that 'trolls' have in common---but first, we should define 'troll'.  This from Wikipedia:   " In Internet slang, a troll (/ˈtroʊl/, /ˈtrɒl/) is a person who sows discord on the Internet by starting arguments or upsetting people,[1] by posting inflammatory,[2] extraneous, or off-topic messages in an online community (such as a forum, chat room, or blog), either accidentally[3][4] or with the deliberate intent of provoking readers into an emotional response[5] or of otherwise disrupting normal on-topic discussion"
So back to the personality traits.  It was kind of fun to read these then go back to the trolled discussion to see this personality come out--- Machiavellianism (willingness to manipulate and deceive others), narcissism (egotism and self-obsession), psychopathy (the lack of remorse and empathy), and sadism (pleasure in the suffering of others).

Here's what I don't know.  Does the internet provide an outlet for these people, and it blows off steam for them?  Or does it just feed trolls so their self importance manifests in daily living?

If Ted Kaczinski had internet access, would he have had a place to blow off steam from his tiny cabin  alone in the woods off the grid so he wouldn't have sent off mail bombs?

I'm guessing internet trolls habitually check search engines for their own names.  If so, 'Eddie1278' might read this....Unfortunately trolls are not capable of knowing they are trolls.
Posted by flyingvan at 4:49 PM No comments:

Back To The Project 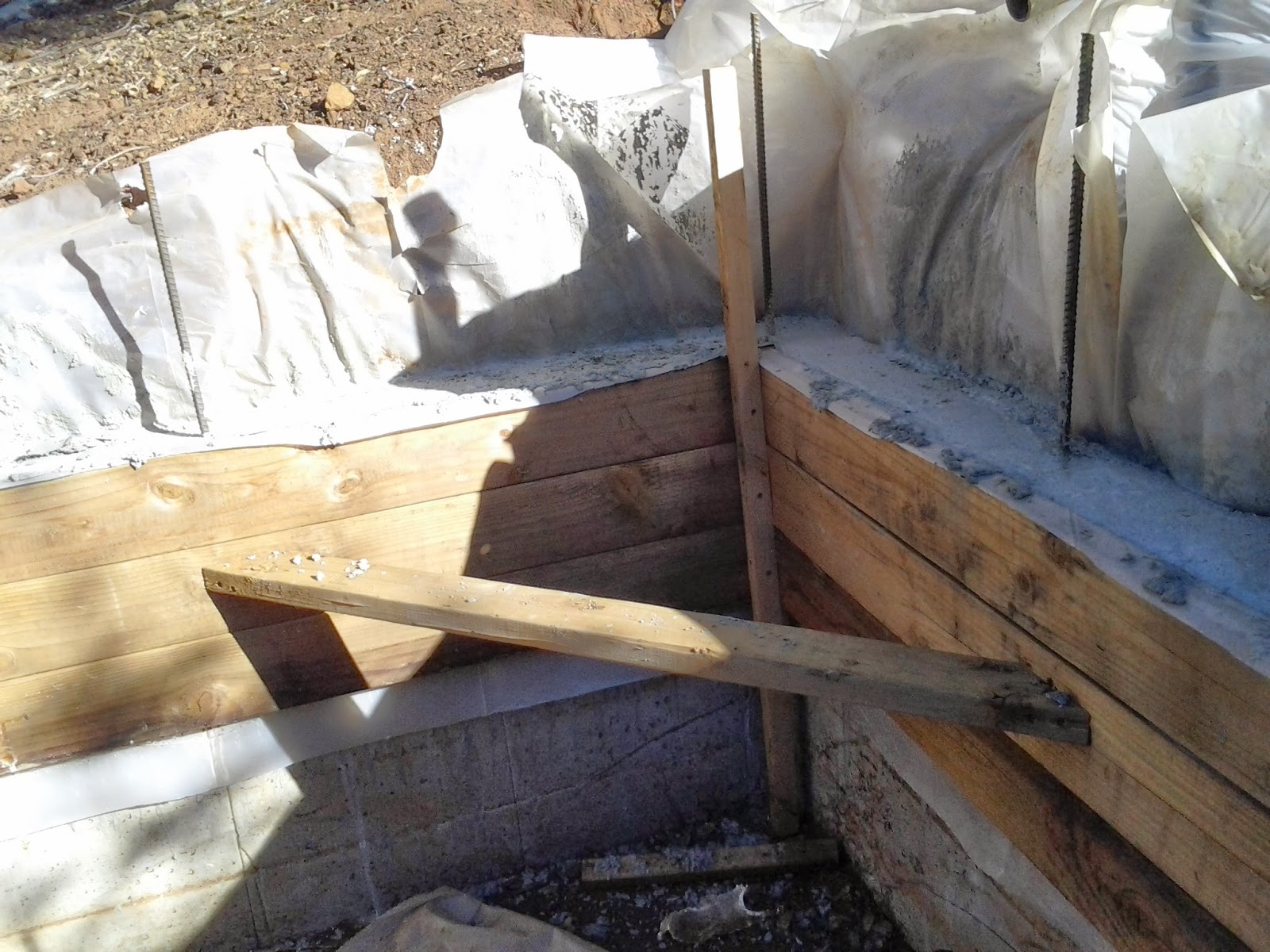 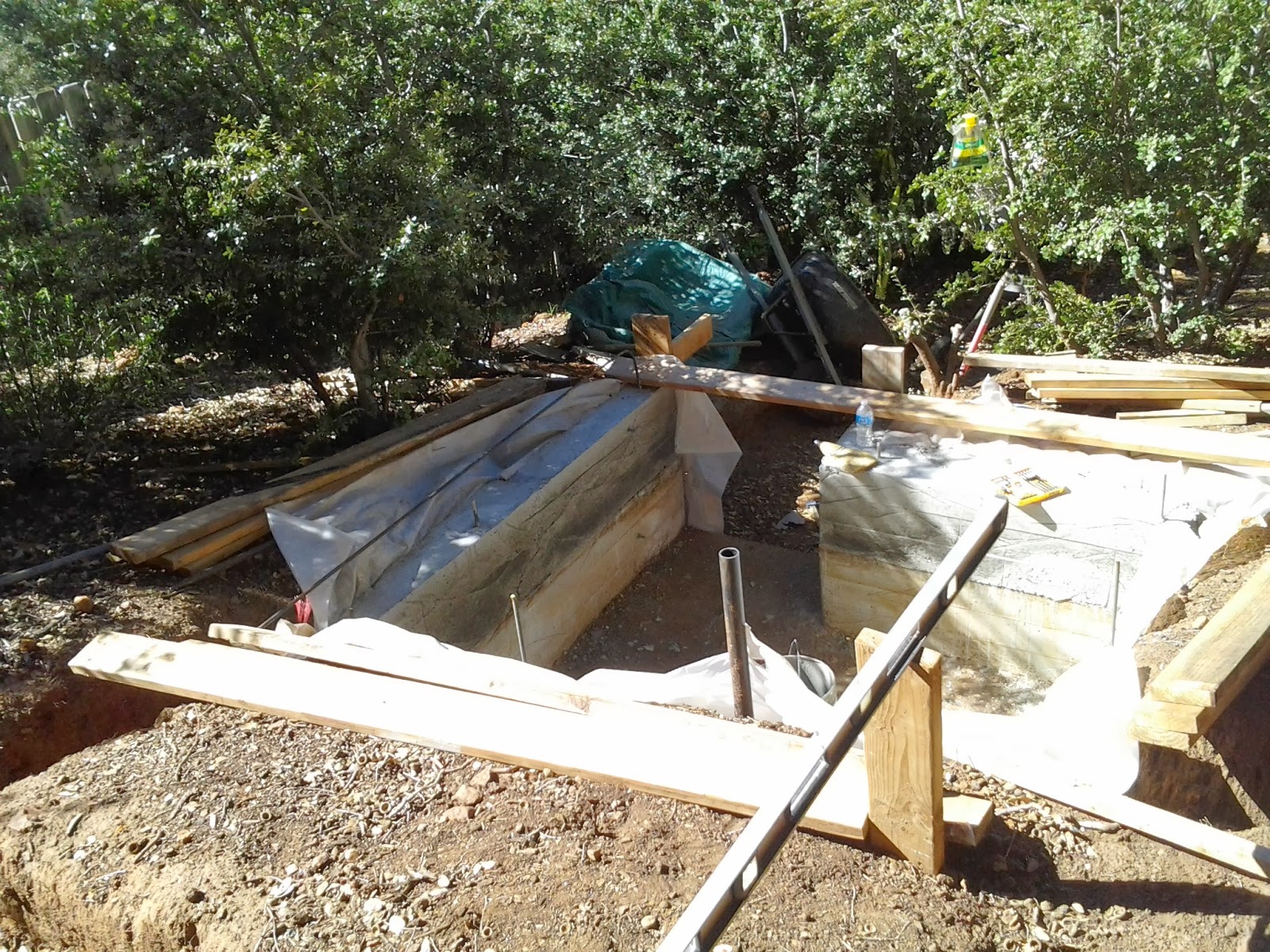 I sort of backburnered this for awhile, but no more excuses. I got the next tier done for the slipforms for the underground laundry room at the cabin. I had to carry 40 sacks of premix down in there then mix it and use a bucket to pour it in the forms. I had two days to do it but AnnaMarie said if I got it all done in one day we could have a date the next. Great incentive!
Posted by flyingvan at 9:44 AM No comments:

Warmest Spot In The Nation

Patrick's mountain bike team has paired up with some riders from Brawley.  They come up and ride in our mountains in the summer when it's too hot.  Now that it's winter, it's nice to drive an hour down the hill to where it's 45 degrees warmer.  You pay for it by riding in loose sand. 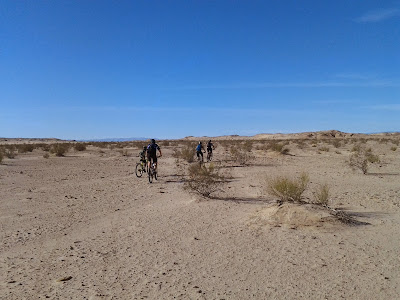 I'm a little sore today.  We rode 15 miles through these little washes.   Patrick is more sore after failing to properly negotiate a 36" drop....He's got an awesome tire impact scar across his face.  Years of gymnastics training paid off, he rolled through the crash pretty gracefully.  Of course I made him go back and do it successfully as soon as he shook it off. 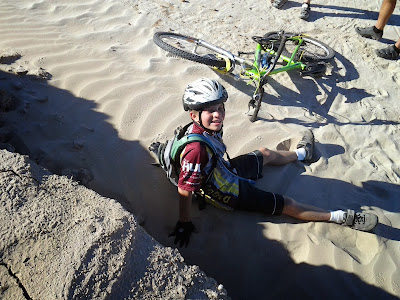 We rode up to this old concrete bunker that used to be a radar mount.  This is where the Blue Angels do their training, and it's an active bombing range just to the south.  Pretty fun day. 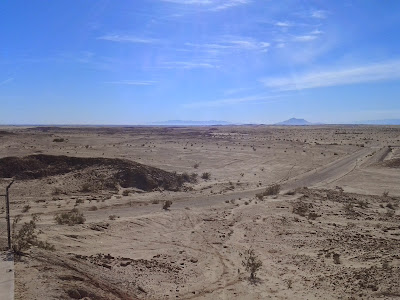 Most of the nation is in a cold snap right now.  It's 78 degrees here today.  The mountain in the background is La Cienega in Mexico.

Posted by flyingvan at 8:12 AM No comments: 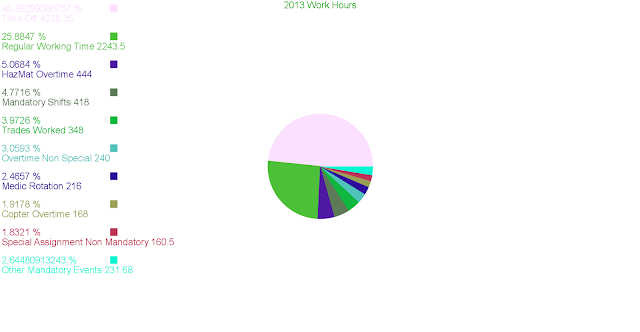 Someone that serves on the lake board with me always gives me grief about how much firefighters earn in a year. It's hard to argue that we don't do well, but there are some things the media, when they print our names and incomes, fail to mention-- ---Our retirement is only figured on our base pay, not on overtime. By short staffing, the city saves money on retirements, insurance, and benefits. ---Some of that overtime is voluntary. Much of it is mandatory. I worked 418 hours of mandatory shifts in 2013. ---I was physically at work more than I wasn't at work in 2013.... Compare that to our troops, though. Some earn as little as $17,832 for the year, and get, as I undestand it, about 30 days worth of 'leave' per year. Or How about AnnaMarie? Her pay is essentially zero (this is hard to quantify. She has complete control over our finances and has access to all 'my', technically 'our', income) But she has no real time off, either acting as Mom or Wife or Gardener or Painter or Entertainer or Chauffer or any of a thousand other tasks...
Posted by flyingvan at 1:39 PM No comments: 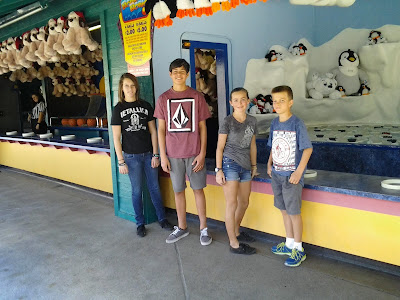 There's a special deal at Knott's Berry Farm for firefighters this time every year. I took McKenna and her friends a few times. Lauren couldn't care less for roller coasters, but Patrick, being Dangerboy, loves them. Since we downscaled from the giant Durango (7 seats) to the Versa (5 seats) we only invited 3 other kids. It was a great group and the park was pretty empty---they never had to wait for a ride and did 36 rides.... I touched bases with them a number of times but pretty much left them alone. I spent my time riding a few rides and researching alternative building methods.. 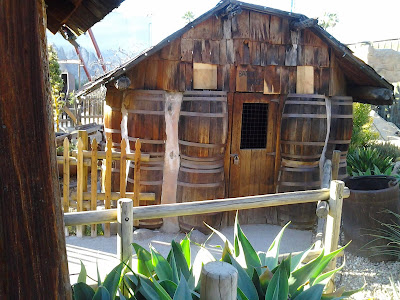 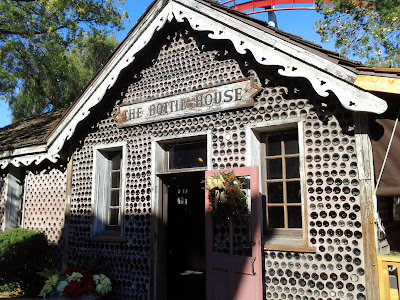 I have to say I had to deal with some nostalgia. We sure had some fun back in the day, and though I wouldn't trade where I'm at for the world, I got that 'can never go back' feeling. That might have been part of my motivation to take Patrick and friends out of school for the day for the 2 1/2 hour drive (with no traffic) so maybe he could get a taste of it.
Posted by flyingvan at 3:19 PM No comments:

I'm Not Gay, But I Do Love Rainbows 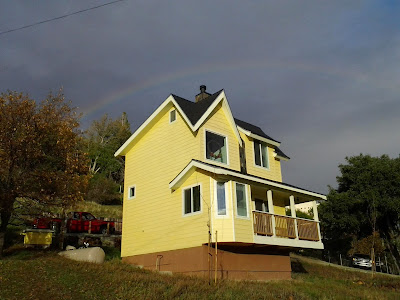 I'll have to get pictures of it now that it's decorated. AnnaMarie recruited me to cut down one of the many feral western red cedars on our property and lug it to her cottage for her Christmas tree. Somehow the act of bringing it indoors made it double in size, and I had to bring it back out to take the bottom 18" off it so the angel wouldn't concuss on the ceiling. That's when this sunset rainbow appeared...Actually I had a much more vibrant picture but didn't save it properly...Same with the unicorns that appeared.
Posted by flyingvan at 7:54 AM 1 comment:

Just Need Paint and an Outtage

Got the generator box all finished. It really is quiet and runs cool. It's about as loud as the fridge inside the cottage. Plumbed to propane so the gas won't ever go bad. The roof is hinged in case the electric start fails and you have t 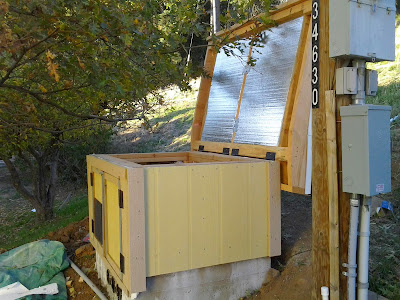 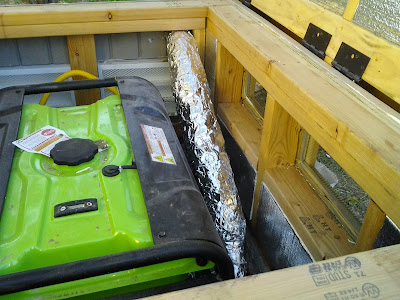 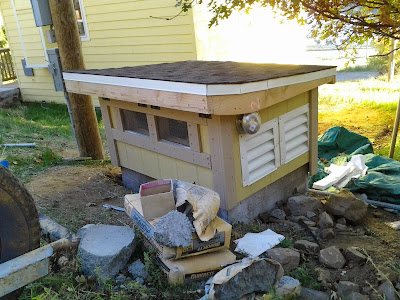 o pull start the thing. The exhaust is a water heater flue pipe wrapped in glass wool insulation then wrapped in aluminum high temp tape. I re-did the exhaust, it's double walled pipe going through the wall and extending out 12"---I was worried about exhaust heat so close to the fascia.
Posted by flyingvan at 11:38 AM No comments:

Sound In, Heat Out

The challenge is keeping the sound in and the heat out. I made an adapter coming off the muffler so I could channel the exhaust out of the box. I suppose I could get a better pic of how the adapter attaches; I wrapped the elbow with high temp aluminum tape for insulation and to keep the elbow from sliding around. The interior is all lined with foam board. The walls that face the house, have the studs turned sideways--that way there's room for insulation and sound transferring lumber doesn't go all the way through the wall. 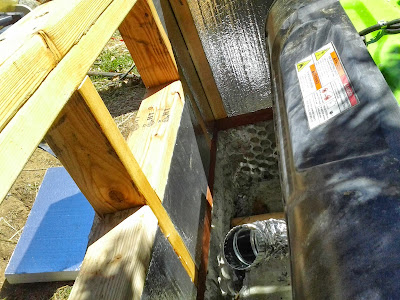 Then, outside the foam board, there's a layer of fiberglass insulation. Even before putting all the vents in and roof on, it runs much quieter with a little sound barrier between the generator and the house. I walked AnnaMarie through the start-up procedure for the first time---she's able to manage it fine 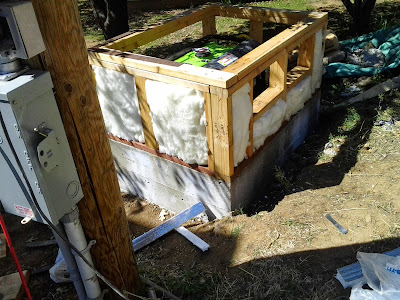 A three inch duct will take the exhaust out. My adapter isn't a tight fit, I didn't want to create a backpressure issue (but I think 3" pipe for a short run won't be a problem)
Posted by flyingvan at 11:36 AM No comments: 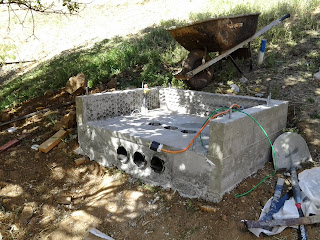 So the base is done. I like the effect of the concrete that was poured against the bubblewrap. Some of the cells filled with concrete, but if I ever did this somewhere that shows, I think I could be gentle enough so that wouldn't happen. I got the texture I wanted to absorb sound at least. I ran the generator. The transfer switch seems to work well, and I was able to power everything in the cottage. There's a slight flicker in the lights when you start up something with a motor, like the range hood or garbage disposal. 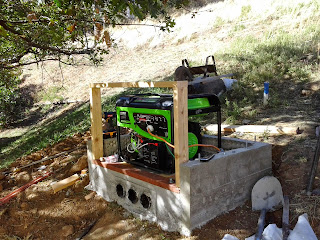 Posted by flyingvan at 8:54 AM No comments: 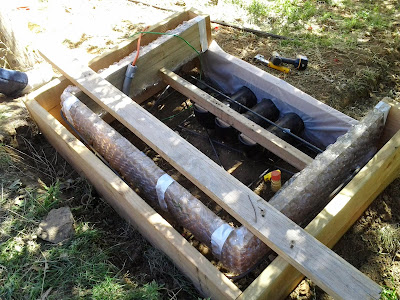 Just before I left for a week in Catalina with patrick's 8th grade class I got the base poured. I had to resist the temptation to strip the forms before I left--the concrete was still pretty green. You can see the sewer pipe elbows that will draw cool air in below the unit. I wrapped the inside of the forms with bubblewrap---the idea is walls with more surface area will absorb more sound than flat walls. We will see.
Posted by flyingvan at 8:58 AM No comments: 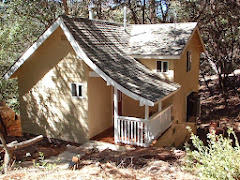 AM in Sunset Beach The Followship of the Blogs 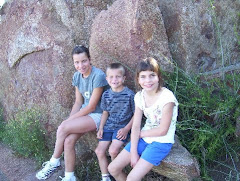